You are here: Home1 / Blog2 / Commemorative Medals3 / Custom made commemorative medals – how to create a project?

Commemorative medals are medals that not only memorialize anniversaries, events or people, but also serve as trademarks of persons, companies and institutions that issue and give these medals. This is why it is important that the design of medals should be exceptional, unique and prepared in accordance with our expectations. The solution here is to order custom made commemorative medals, but how to choose the right project? Our experience gained during the implementation of thousands of projects, many of which are custom made commemorative medals, allowed us to distinguish elements that are crucial for such kind of medals. We know that even the highest quality of workmanship and decorative sleeves languish because of bad designs. That’s why we have prepared a set of rules to help you prepare your idea for exceptional commemorative medals.

Occasion – the most important element of commemorative medals

What distinguishes commemorative medals from sport medals is, above all, an occasion – an obvious feature which, unfortunately, is sometimes forgotten. A clearly defined occasion makes the purpose of issuing a medal clear from the beginning, and people who receive it need only one glance to exactly know why it was given to them. Thus, when preparing an idea for a commemorative medal, consider what is the most important – an occasion for issuing a medal (e.g. an anniversary, an important event, accomplishing a goal, etc.).

Another important element you have to take into consideration when preparing an idea for a design of a commemorative medal is the main graphic element that will be its distinguishing feature. It is an element strongly associated with an occasion or, for example, with the place in which a medal will be given (in case of commemorative medals given by city offices), a company or an institution giving a medal.

Your idea for a commemorative medal need not be limited to just one graphic item. While preparing it, you can also consider additional elements, such as logotypes, which will make the association of the medal with your company, city or institution, even stronger. 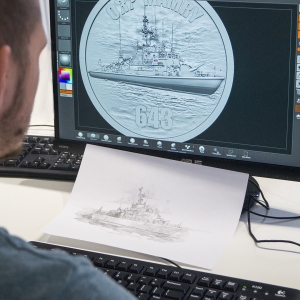 When preparing an idea for a design, remember that you also have the other side of a medal. Of course, you can confine yourself to one side and leave the other flat, but the other side may be useful if you want to place more graphics or text on the medal.

Custom made commemorative medals and their shape

The attractiveness of medals is also influenced by their shape. It became commonplace that medals are mainly flat discs, but the development of production technology combined with creativity influenced the appearance of new, more interesting forms. When preparing your idea for custom made commemorative medals, you can choose other shapes – e.g. rectangular or irregular – tailored with accordance to the graphic elements of the design.

Other elements of commemorative medals

What is more that can be taken into consideration when creating a design is also the form of a medal – whether it is to be made in 3D or in 2D, as well as the colour scheme. You can choose not only among different colours of the medal itself, but it is also possible to cover its individual elements with special paints, which will emphasize its uniqueness even more.

The medal is not everything – accessories

If all the aforementioned elements were taken into account while preparing an idea for a commemorative medal, you have a guarantee that your medal will be unique and exceptional. However, the process does not end with the project itself, because in case of commemorative medals you can make them even more prestigious with additional accessories, such as specially fitted cases. Elegant boxes will add prestige to your medals, and you can also equip them with engraved badges with additional information.We hope that our short guide will inspire you to create a unique idea for a commemorative medal. As their manufacturer, our company is able to produce commemorative medals that are custom made according to your idea. Don’t worry if you don’t have it – our team of graphic-artists will prepare a design for you, according to your expectations. If you are looking for a custom made commemorative medals manufacturer, please use the button below and see our offer:
Commemorative Medals - see more

Sports medal – how to design a medal for an event?
Scroll to top